Land Use and Zoning

Main | Plan Commission and Board of Zoning Appeals

On March 16, 2020, the City Council approved an amendment to the City’s development standards in Article 7 of the Zoning Ordinance. This amendment revised the standards for accessory structures, as well as standards for fences and walls. This step was primarily taken to address some of the common issues and complaints that arise from the strict application of the Zoning Ordinance. These changes, among other things, will allow property owners on corner and through lots more flexibility in placing accessory structures and fences on their property. These changes will make the code a bit clearer, easier to use, and more compatible with recent development trends.

The revised Zoning Ordinance has been uploaded to the City’s website. The revisions to these standards can also be found here.

On February 18, 2020 City Council approved an amendment to the City’s landscape standards in Article 7 of the Zoning Code. This amendment is a step taken to resolve consistent development issues involving the landscape code. In the past three years, there have been more than 30 waiver and/or variance requests for landscaping, which signified that old standards needed to be reassessed. The approved modifications should significantly reduce the number of waiver/variance requests, while still providing an acceptable quantity of landscaping on sites in Jeffersonville. As part of the amendment, staff also updated the lists for native trees as well as pest/nuisance trees, which will better assist in identifying those trees that are preferable and those that are not allowed to be planted in the City.

The Zoning Ordinance has been uploaded to the City’s website.

On September 3rd, 2019, Jeffersonville City Council approved an amendment to the City’s Zoning Ordinance relating to Signs.  Planning Staff brought the amendments to Articles 7, 10 and 14 of the Zoning Ordinance to Council primarily to address some legal issues with the previous language. While making changes, we worked to streamline the document, improve formatting, and address some common permitting/enforcement issues that we regularly see in our office.

Planning and Zoning is beginning an effort to “right-size” zoning in the small business corridors just outside of the Downtown area. These areas, between 10th St. and Eastern Blvd. along Spring St. and between Meigs Ave. and Main St. along Tenth Street, have a large number of small businesses operating in old houses or other small commercial structures. Unfortunately these businesses are currently zoned in the same manner as the big boxes and strip centers on the edges of town. This Big-box zoning makes it more difficult for them to make changes to their buildings, and fill spaces with small, start-up business.

Over the next several months we’ll be offering property owners in this area the opportunity to right-zone their property to the newly revised NC (neighborhood commercial) zone district, approved by Council on March 18, 2019, for no fee. This will help make their properties conforming to the zoning code and remove hurdles to investment in the area. 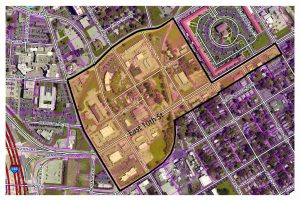 Just north of Downtown Jeffersonville, and wedged between the Clark Memorial Hospital and the Quartermaster Depot, there is a small 10-block region of the city that has great potential for redevelopment. The Planning and Zoning Department has named this area the “Quartermaster Summit” as there is a slight rise in the land here that offers some great views of the Louisville Skyline. Recently, the Department drafted an amendment to the zoning code for this area that was approved by City Council.  The Quartermaster Summit Overlay District (QSO), is intended to encourage high quality, urban-style development in this area that takes advantage of its strategic location and encourage a mix of uses that better serves those who live and work in the immediate area.

The QSO’s primary function is to over-ride many of the suburban-style zoning standards that currently exist in this area and allow for development that looks and feels much like the development in the adjacent neighborhoods.  The Overlay district reduces required setbacks, parking requirements and landscape buffers, removes density restrictions and increases height allowances in the area. In exchange for easing these restrictions, the district sets forth specific design standards that must be met by new development. This helps ensure quality architecture and building siting. It also supports walkablity by setting standards for sidewalks and street trees at new development. The complete text of the QSO can be found by clicking here.

ALL building projects in the QSO must be reviewed by planning staff to ensure consistency with the provisions of the overlay district.

Update to the Future Land Use Map 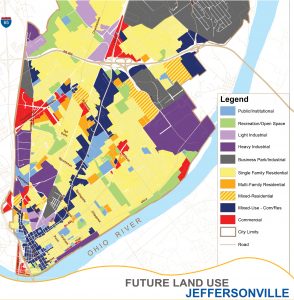 On June 19, 2017 City Council voted in favor of an update to the Future Land Use Map that is part of the City’s Comprehensive Plan. This Future land use map does not change the current zoning on any property. Rather, the map acts as a guide for future rezonings as they are requested.  When a property comes up for rezoning, the planning and zoning department first looks to make sure the request is consistent with this future land use map. Proposed zoning changes that are consistent with this map will likely receive a more favorable recommendation to the Plan Commission and City Council than a proposed zoning change that is inconsistent with the Map.   City Staff can give it a favorable recommendation. If the request is inconsistent with this map, that may be a reason for an unfavorable recommendation to the Plan Commission. You may view the future land use map here: FLU_Changes – 6-20-17 .  It is also found within the Comprehensive Plan (link above). 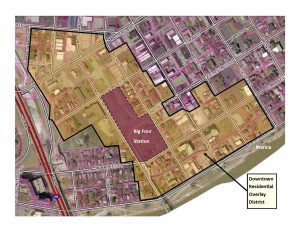 A recent change to our zoning and development policy was passed by City Council that puts Jeffersonville on the path to creating a vibrant and relevant downtown neighborhood and business environment where more residents use our outstanding community facilities and patron the many new and existing shops, restaurants, and services. The DROD helps meet the goals and vision of our City’s Comprehensive Plan, adopted in 2015, which set the vision for Jeffersonville to “define itself through vibrant downtown living options.”  ALL building projects in the DROD must be reviewed by planning staff to ensure consistency with the provisions of the overlay district.

Additional information can be found in the following four graphics:

What does the DROD do?

On August 1, 2016, City Council approved 2016-OR-45 which, among other things, amended the land use tables for automotive uses in the city.

Please refer to this updated table. Click here for a .pdf of the Land Use Table for Automotive Uses. 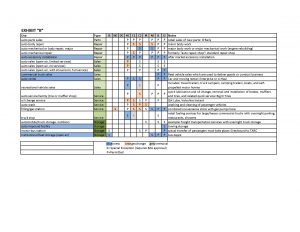